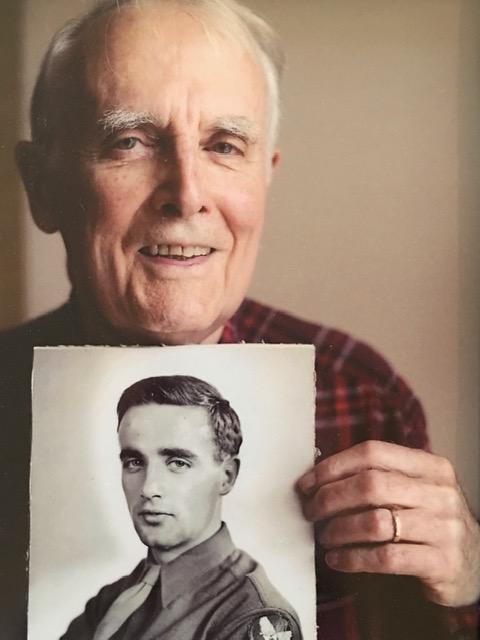 To understand why Frank Winslow chose to voluntarily stop eating and drinking (VSED), one needs to know our family’s history.

Frank was my husband for almost 64 years. He had joined the military in November 1944 – the day he turned 18. He worked his way up from Private to Lieutenant Colonel, specializing in aerial mapping, photography, and aviation, both fixed wing and helicopter. He was in the Korean and the Viet Nam wars. But mostly what he ended up doing was being a “staff” officer involved in leadership and policy. In addition, he was New England practical. Before we were married, he gave me two books, The Army Wife and a Good Housekeeping Cookbook. We had six children and moved 28 times in 25 years. When Frank was overseas and I was at home with the children, I moved to be close to my mom, Dorothy. Even though she was employed she helped balance our lives so it was natural when Frank retired that we moved to Dayton, Ohio, to be close to my mother.

Dorothy had been “world’s best secretary,” but in the 1970s, she started having concerns about her memory. Her doctor told her to “go home and forget it.” She quit working, time past and more problems started showing up. She would pay her electric bill twice but forget to pay her water bill. She got lost driving to the store and missed appointments. Her doctor still didn’t have any answers. When we moved to Bellingham, Washington, in 1979, Dorothy came with us.

In 1980, I went to a class called, “You and Your Aging Parent.” As I described how my mother was acting, the woman sitting next to me said, “Oh, your mother has Alzheimer’s disease–just like my mother.” After class we got together to compare stories and look for answers. Others joined us; we had frequent meetings around our kitchen table. We decided to organize, and in 1983 Frank incorporated the Alzheimer’s Society of Washington.

Frank and I and our four college-aged sons did our best to care for Mother, but eventually her care needs overwhelmed us and we moved her to a nursing home. Mother didn’t have legal documents to allow me to make healthcare decisions for her, but since I visited her and was involved, the nursing home administrator allowed me to say what care I thought she would want. In 1985, after years of fighting against Alzheimer’s progressive losses, she died.

Frank and I continued with Alzheimer’s and broader dementia issues. I worked with the Alzheimer’s Society’s support groups and on educational issues. Frank, using his knowledge of governmental systems, advocated in Olympia with legislators and administrators to change the state law so that a hierarchy of family members could legally speak for someone who is no longer able to speak for themselves. Frank also went to the Washington State Bureau of Statistics and encouraged them to include Alzheimer’s disease as a cause of death, which they now do.

Fast forward twenty-five years to 2005, when Frank and I decided we wanted to be proactive about growing older. We moved to an “age-friendly” condo–a one-level unit with an elevator to underground parking–that was close to shopping and on a bus route. We attended meetings about “The Art of Death.” We completed our advanced directives. We concluded that our “line in the sand” would be our ability to do our basic Activities of Daily Living–eating, bathing, toileting–without assistance. We reviewed our Compassion and Choices advanced directives with a Death Doula and concluded we were “good to go.”

By 2015, while Frank was still the same considerate person he had always been, he started having problems–like driving across town and getting lost coming home. His doctor said he had likely experienced a stroke and had vascular dementia. Frank began attending the Alzheimer’s Society’s classes for people with early memory loss. He remarked, “When we helped found the organization, I never thought I would need its help.”

Frank began to examine his options, knowing very well that dementia–whether it is Alzheimer’s disease with a long slow decline, or vascular dementia that stairsteps down when a large or small stroke occurs–causes a person to lose more and more abilities until, sooner or later, death occurs. He was adamant that he did not want to live in a care facility. Even with a progressive dementia he wanted to stay in charge of his life–and death.

Although Washington State had approved physician-assisted dying, we knew that people with dementia can’t qualify for it. Then we heard about VSED, the technique of voluntarily stopping eating and drinking to control when death will occur. In the fall of 2016, we attended the first national VSED Conference at Seattle University. At that conference we learned more about VSED-related legal issues and about Choosing to Die, a book about VSED by Phyllis Shacter.

Back home–and knowing it was getting close to decision time–we consulted our attorney to get advice about legal issues. The attorney told us we would need releases for the people who would assist with Frank’s end-of-life care–liability releases to protect the doctor and other professional caregivers coming to help. She also recommended that, when the time was near, Frank make a video about his plan.

Next, we visited our doctor. Frank asked if he would support Frank’s choice of VSED. Our doctor said, “I’ll do anything that is legal.”

The major consideration in planning for VSED is the “when.” A person doesn’t want to die sooner than necessary, but, at the same time, a person can’t wait too long. Frank knew he couldn’t let his dementia take him past his decision-making ability.

Frank’s 90th birthday was in November 2016. That occasion gave us the wonderful excuse to invite family members from near and far to gather and celebrate Frank and his long life. It also was an opportunity for Frank to talk about his ideas about dying–sometime in the future.

After the party, Frank continued to attend and appreciate his friends at the two weekly “early memory loss” classes until one day, suddenly, in the spring of 2017, he was unable to do small, simple tasks–like flip the front door bolt to lock the door at night, something he had been doing for years. And, when confronted with brushing his teeth, he couldn’t remember how to turn on the water. That really scared me because I had seen my mother unable to remember how to brush her teeth in the early 1980s.

Then, amazingly, Frank seemed to recover, and he was again able to do routine tasks. But after a series of tests his doctor simply said, “You have a crummy brain.” So, in the spring of 2017 we got a copy of Choosing to Die and, using it as a handbook, gathered with two of our adult children and potential caregivers to make specific plans. Because the professional caregivers wanted to be sure Frank would get full support from his doctor, we made an appointment and all of us crowded into the small examination room. The doctor asked Frank why he wanted to choose VSED, and Frank answered, “I want to control my death.” The doctor agreed to work with the caregivers and Frank set the date. He would begin VSED in early May.

Frank made a short video to confirm his choice, and our attorney prepared the needed legal documents. We rented the necessary equipment to convert our bedroom into a care setting: hospital bed, rolling bedside table, walker, humidifier, and so on. Our five adult children–and several of the grandkids–came to say goodbye. Some could only stay a short while; others took time off. Frank enjoyed being the center of attention.

In preparation for his final fast, in early May Frank began to limit and restrict his diet. I joined him in solidarity, tapering down to eating only 500 calories per day.

On a Saturday morning in mid-May, Frank had his last drink. Our family visitors left, except for our daughter who is a nurse and our son and his family who live in town. We settled into the waiting game.

Frank played his part as if he were following a script. He continued his regular routine, but without eating or drinking while the rest of us went away from the condo for meals. Our daughter offered her care recommendations but let the professional caregivers do the “hands-on” care. As Frank grew weaker, he retired to the hospital bed in our bedroom. On Monday, our doctor came for a visit and said it was time for Hospice to get involved.

Our son, his wife and their two college-age kids came and spent the days. Frank told them stories they had never heard. They talked and sang. During their visit one of the “Oh NO!” moments happened when our son (having a tickle in his throat) went to the kitchen and returned with a mug of hot tea that he placed on the arm of his chair. I slid around the bed and past his chair and spirited it away. Whether or not Frank saw the tea we will never know, but he did not react or ask for a “nice cup of tea,” which was an old family joke from our experience traveling in the United Kingdom.

As Frank became weaker, he drifted into a coma. His caregivers watched carefully and kept him comfortable. We all gathered around the foot of his bed and chatted and waited. At night, I was able to slip into the hospital bed and appreciate just being with him. On Saturday, the priest came to give Frank Last Rites, and on Sunday he died.

None of us wanted to say goodbye, but we respected Frank for making a difficult and courageous decision. We agreed that those of us who were with Frank throughout his VSED process were comforted by being able to be with him through his final journey.