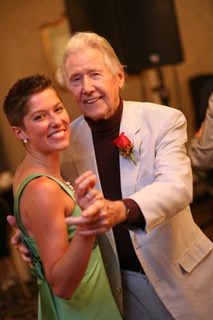 My dad Craig lived 93 vibrant years, curious, social, adventurous, in love with my mother for 64 years until her death. In his 94th year, he developed “failure to thrive”, where most of his systems began to shut down. He moved from his independent living apartment to assisted living and called me to “come out here and be my coach.” A lifetime advocate for the Hemlock Society, he believed in death with dignity on his terms. His state did not have a medical aid-in-dying law, so he chose to stop eating and drinking and knew he needed support.

Years before, he had written that he wanted to be done when he was “confined,” no longer able to move on his own, no longer interested in reading 3 newspapers a day, no longer delighted by food, and not really interested in his usual martini. Now, he had reached that point. When I arrived, we talked about his readiness to die. He was crystal clear that he didn’t want further treatment. He qualified for hospice care, and they helped manage his bed sores, his daily bath, and attempts to eat. One night he decided that he needed to begin the process of stopping eating and drinking.

He notified his doctor, the nursing staff, his family, and the administrator of the facility about his intentions and told them that his “coach” would be helping him. I ended up being more of a linebacker as I had to fend off staff who didn’t respect his wishes. They wanted to give him ice cream, put in a pic line for antibiotics, minimize the amount of morphine he was getting, and talk him out of his decision. At each staff shift change, we had to re-explain his wishes. The whole medical establishment pushed for him to stay alive in spite of his steadfast directive that he wanted to die. His pain and anxiety caused him to twist his bedsheets, mutter about a secretary who couldn’t take dictation, writhe in discomfort in his bed, and occasionally yelp. I requested that hospice increase the quantity of morphine to quiet him, and he then was more peaceful.

Without adequate medical support, he said the first two days were “hell.” He lasted five days from when he stopped eating and drinking. At 3:00 a.m., my sister and I saw him die calmly, turn grey, and finally relax. I stayed to watch the funeral home staff put him into a body bag and take him away. At that point, I lost all composure.

My father wanted to die with dignity, but the state he lived in had not passed a medical aid-in-dying law, and the staff at his assisted living facility pushed to keep him alive against his wishes.