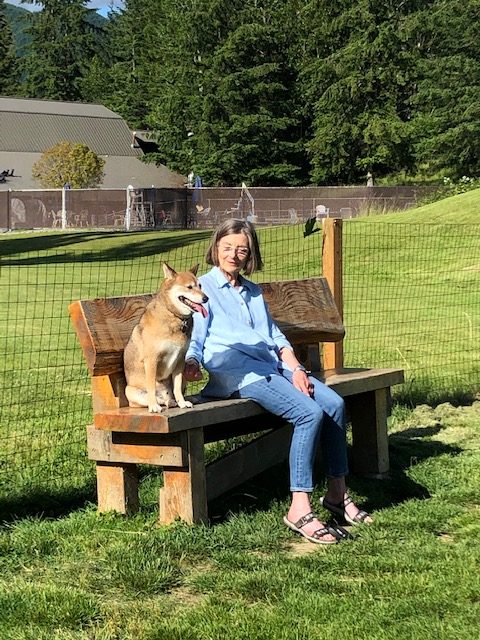 After receiving a diagnosis of Alzheimer’s and vascular dementia, my mother felt she was trapped in a box canyon. She wanted the death with dignity prescription but since the law is written in a way that excludes those who suffer from neurological diseases that was not an option for her. Still, even a week before her terminal fast, she asked, “Why can’t I just have the pills?”

She was very clear she never wanted to be institutionalized again. When my mother was in her 20s, she was isolated with two children on a military base in Germany. My father was a young doctor, raised Catholic, who was able to go forward in his training because of a military program. She accused him of having an affair, and when he denied it, she tried to kill herself. She wound up in a mental hospital stateside where my father colluded with her doctors to keep her in the facility. It took my grandparents and lawyers a year to get her released. After the recent dementia diagnosis, my mother would grasp my hands and beg me not to lock her up.

I attended a workshop at my church hosted by Phyllis Shacter, author of Choosing to Die. I bought and devoured her book—the story of her husband’s journey through VSED. I loaned the book to my mother, who, after reading it, asked me to help her make the arrangements to VSED. It was her way out of the box canyon.

The learning curve that followed was steep. My mother’s regular physician was not able to support her decision to VSED and tried to talk her out of it. The neurologist told my mother that by the time she had to go into assisted living, she wouldn’t mind it. She was furious and expressed her preference for staying in her home in no uncertain terms. He said, “You may not have a choice,” to which she responded, “I do have a choice. I can stop eating and drinking.” It was a testy, stand-off moment. My mother was not one to back down. She was a self-reliant woman who identified with the land, having grown up on a ranch, and she lived in the Eastern High Sierra for many years. She loved the wild, that which could not be tamed or domesticated. She was intellectually accomplished, productive in three fields: as an art critic, a script supervisor on film sets, and as a writer of biography and fiction. After the doctor’s appointment, my mother fumed in the car: “Do you think he’d dare tell a man he won’t mind losing his intellect and autonomy?”

Deciding on a date and determining the window of competency was agonizing for us. We wanted to spend as much time with my mother as possible. On her good days, VSED seemed like an outlandish idea; she was cheerful, puttering around her house and offering to cook an omelet. On her bad days, we wondered if she could do it at all; she cried when I went to market because she’d forget where I’d gone. She called all the time because was afraid of being alone.

I thought that we would get clear signals of when the right time had come. My mother would stop being able to dress herself or feed herself, but soon it became evident that my mother’s independent habits would far outlast her mind. I spoke with the former head of the local Alzheimer’s Association who confirmed that some people deteriorate mentally yet can still perform these tasks. My brother and I agonized. I went out of town for a few days with my family and when I came back, it was clear my mother had had some kind of neurological event, maybe a small stroke or a brain bleed. We called it a memory wipe-out. My brother and I had to explain to her what her conditions were and what her end-of-life-choices were. I offered to fly to Switzerland with her in order for her to receive the lethal drugs. No, she wanted to be at home. We even discussed the helium hood method. No, she would not risk criminal action being brought against us for securing the helium. By the end of the conversation, she was very aware of what had just happened and what was at stake. She was afraid of losing too much of her memory to take action. She said to me, “I don’t want to lose my choice to VSED. You must remind me every day until we start.”

Shortly thereafter, we spoke to her physician and returned to the neurologist. Both of them felt my mother was passing out of the window of mental competence, though she continued to clearly and consistently articulate her wishes. Watching her mark her VSED start date on the kitchen calendar seemed to stop time. Her handwriting would not follow on any date thereafter. I wept as I packed up the food in her kitchen, after a lifetime of feeding each other. I came back from errands one day stricken by anticipatory grief. I asked if my mother wouldn’t like to just let the disease take its course. She sat up, close to my face, “Don’t you grieve this,” she said. “I’ve lived a conscious life, and I want to die a conscious death.”

On the day she began her fast we gathered—each of us masked because of COVID, the doors and windows open—and the doula led us in an opening ritual, reminding us that we were all poised at a threshold and each of us would be transformed by my mother’s passage. Those words were truer than I could have imagined. My mother read Wendell Berry’s “In the Peace of Wild Things.”

The first four days of VSED felt like respite from the storm of appointments, preparations, and goodbyes. My mother was calm and cheerful, resolute in her purpose and clear. We all cycled in and out of the family bed and ate take-out on her porch. My son played guitar for her, my husband read her favorite poems, my daughter stroked her hair, my brother rubbed her back. She did ask for water, and when I answered, “I can bring you water, Mother, but then—” she would finish my sentence, “it will defeat the purpose.” My mother never lost her conviction or her focus but she did ask for water for six days. I believe now that thirst is a form of suffering, and it is a mercy to decrease the dying person’s consciousness of it. The liquid lorazepam and morphine helped alleviate her awareness of her thirst but if I had to do it over again, I would have asked for her to be put on a morphine pump sooner.

The doula said that dying in many ways follows the stages of birth. I believe now there is an aperture to a passage out of this world and it has to dilate. At least that’s how it felt, and there was also a stage in the middle that seemed to just go on and on. My mother never asked to stop. Quite the opposite. She wanted to know why it was taking so long. At one point she roused and asked: “Why am I not dead yet?” It was darkly funny. Like any family event, even death can provide moments of comic relief.

I think VSED is complicated by the fact that the average American doesn’t know anything about death, so that aspects of the experience I might have attributed to VSED were actually just plain old stages of death. I remember the hospice nurse telling me, “Even though this is an induced form of dying, your mother is actively dying now. It’s irreversible.” That was a comfort to me, especially because my mother was experiencing what is called “agitation,” which is a stage many people go through. She was trying to climb out of the bed when she didn’t have the strength to do so, and it was very disturbing. This is not uncommon in the dying process; it wasn’t because of VSED. The Hospice nurse administered Haldol, an anti-psychotic, and that helped. Still, it was excruciating to see my parent so diminished. I was relieved when she went into a coma on the eighth day.
The doula was unflappable. When my mother’s breathing became labored, the doula smiled and said, “Sara’s doing the work.” She normalized the process. Because the doula knew the signs and symptoms of death, she was able to pinpoint the exact day my mother would die, nine and half days after she had started. That was a blessing. I am grateful my mother shared her death with my adult children because they now know far more about the process than I did at their age.

I know some say VSED is a form of suicide, but my mother’s death wasn’t violent, rash, secret, or angry. A few days after she died I found her last journal entry: “I pray God to help me let go lovingly and in deepest gratitude and to ease my dearest ones.”

Perhaps we will find better language for this new choice that has been created by necessity. My mother died surrounded by her family, held by us, and beloved by us all of her days. She didn’t lose herself; she didn’t lose her autonomy; she didn’t die among strangers. She did not consign herself to years of fear and disorientation. The caregivers showed us how to bathe her body in lavender oil, and when we dressed her in her finery for the final purification—cremation—we saw that she had graced us with a little Buddha smile.

My family is still recovering from the effects of VSED and our lingering anger over the law that put my mother in this untenable position. Dementia is a terminal disease. She should have been able to request the lethal prescription that others are entitled to under the Death with Dignity Law. No matter how many times she asserted her right to choose VSED, we feel burdened by guilt because we were a part of the process that killed her. It has taken a lot of work to get over that, but I believe I am at the point where the good outweighs the bad in the VSED experience, and I have nothing but gratitude for the people who helped us.